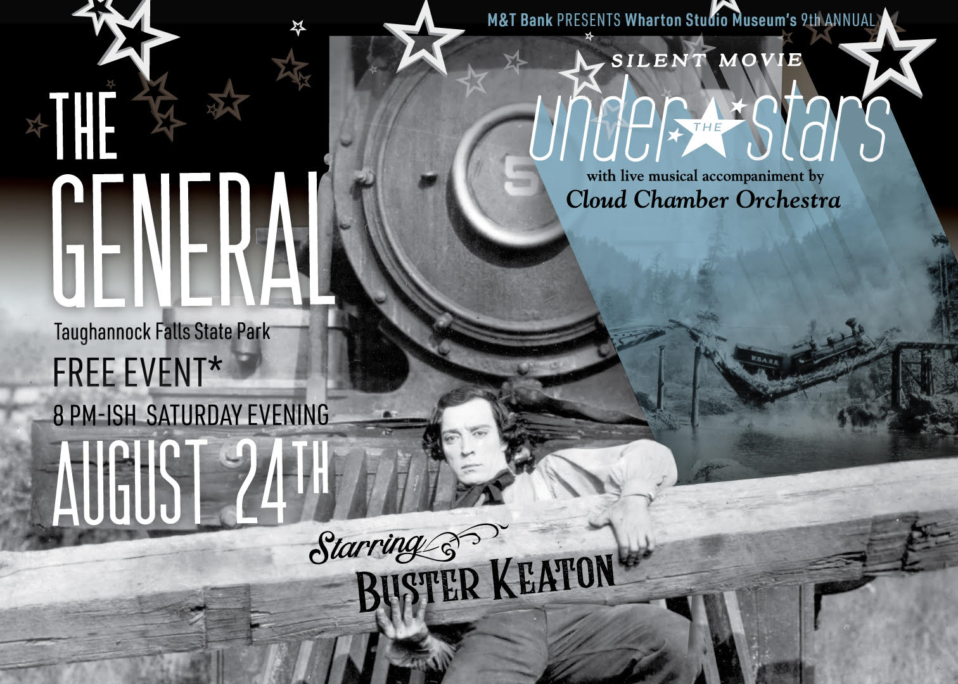 WSM is excited this year to be screening THE GENERAL (1926), starring the inimitable Buster Keaton at Silent Movie Under the Stars on Saturday, August 24, 2019 at Taughannock Falls State Park.   At sundown.

The General, starring Buster Keaton and co-written and co-directed by Keaton,  is considered by many to be the greatest silent movie of all time!  It’s brilliant and funny — the perfect film for all ages!

Set during the Civil War, The General  tells the story of a Tennessean train engineer who tries to enlist in the Confederate Army and is turned down because the army feels he’d be much more valuable for the war effort as an engineer instead of a soldier. Keaton considered The General  his favorite of all his films, and it was his last independently produced movie.

A short episode of the Wharton Studio-produced The New Adventures of J. Rufus Wallingford will precede the feature attraction.

Silent Movie Under the Stars has become one of the most popular end-of-summer events in the area!  Don’t miss this wonderful cinematic night under the stars.  Arrive early and bring a picnic, chair, blanket, and sweater, and enjoy lovely Taughannock Falls State Park by Cayuga Lake.

The event is free and open to the public.  There is a $5. per vehicle parking fee that supports the screening.

Silent Movie Under the Stars  is produced in partnership with the NYS Office of Parks, Recreation & Historic Preservation.  We thank M&T Bank, the event’s Presenting Sponsor, for its continuing support!

See you at the movies on the 24th!

Taughannock Falls State Park is a 750-acre state park located in the Town of Ulysses in Tompkins County, New York in the United States. The park is northwest of Ithaca near Trumansburg

Your ticket for the: WSM’S 9th Annual Silent Movie Under the Stars Featuring The General, Starring Buster Keaton