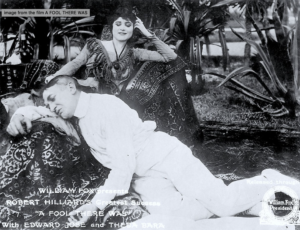 A Fool There Was features a breakthrough performance by Theda Bara, one of America's most famous silent film stars. It is just one of two surviving films starring Bara, even though she made 40. The film launched the career of pioneer producer William Fox and the Fox Film Corporation, and established a new archetype: "the vamp," a woman who uses her charms to seduce men and then ruins their lives. A landmark in early American cinema, the film was selected for preservation in the National Film Registry by the Library of Congress in 2015. This recent 35mm print restoration will be accompanied live by a score for chamber ensemble by Dr. Philip C. Carli. Print courtesy of The Museum of Modern Art, New York. Cosponsored with the CCA and Wharton Studio Museum.