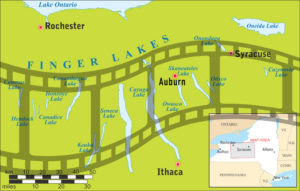 WSM is thrilled to announce the launch of the Finger Lakes Film Trail (FLFT), a fresh opportunity to discover the history and culture of New York State through some of its greatest innovations, by highlighting three of the most significant destinations associated with the burgeoning movie industry: Eastman Museum in Rochester, Case Research Laboratory and Cayuga Museum in Auburn, and Wharton Studio Museum in Ithaca. WSM is honored to be partnering with Eastman Museum and Case Research Laboratory on this exciting new project!
A trip along the Finger Lakes Film Trail, encompassing Monroe, Tompkins and Cayuga Counties, will give visitors the engaging narrative of this region’s role in early American filmmaking: George Eastman developed a flexible film critical to the launch of the motion picture industry; Theodore and Leopold Wharton, prolific writers, directors and producers  of films and popular serials, created Wharton, Inc. Studios on the shores of Cayuga Lake;  and Theodore Case and his associates revolutionized the motion picture industry with the invention and development of sound-on-film technology.
Visitors will receive a little “Passport” to guide them from one destination to the other, as well as a little gift once they’ve visited all three locations! All this is to be determined! FLFT screenings, events and exhibits will happen at all three destinations on the Trail.
Stay tuned as Finger Lakes Film Trail develops a logo, website and other materials! WSM warmly thanks Humanities New York for its support of this project.
The FLFT officially launches on Thursday, April 25, 2019 as WSM goes on the road to Eastman Museum’s Dryden Theatre for a screening of Episodes 1-4 of the Wharton Studio’s Exploits of Elaine, which have been masterfully restored by Eastman.  Hope you will join us there!
Posted in WSM News.