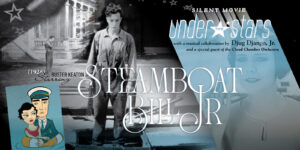 While we were rained out on August 20th for our 12th annual Silent Movie Under the Stars at Taughannock, we're pleased to let you know we've rescheduled and relocated the screening!

Join Wharton Studio Museum on Sunday, October 2nd at 4pm under the stars on the ceiling at the beautiful State Theatre in downtown Ithaca for Silent Movie Under the Stars Revisited!  Featuring Buster Keaton's Steamboat Bill, Jr. with live original music by Djug Django, Jr. The screening, taking place during Apple Fest, is FREE and open to everyone. For details visit https://stateofithaca.org/info-page-sg/e/silent-movie-under-the-stars-revisited-424552847997/

And a big thank you to The State Theatre and to Ithaca Attorneys Littman & Babiarz for helping us turn lemons into lemonade and making this event possible!

WSM was so disappointed a storm forced us to cancel Silent Movie Under the Stars at Taughannock and its rain date of the following night -- the first inclement weather for the screening in eleven years and, true, the rain was much-needed! Thank you to everyone who came out to Taughannock Falls State Park and we will see you there next year.

In the meantime, join us for Steamboat Bill, Jr. on Sunday, October 2nd at 4pm for a free screening at The State Theatre!

Presenting Sponsor for Silent Movie Under the Stars is M&T Bank. Its Producing Partner is the NYS Office of Parks, Recreation and Historic Preservation. Cinemapolis is our Media Sponsor.