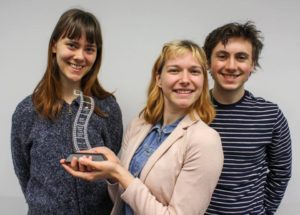 Congratulations to all the filmmakers in Silents Roar! Film Festival on April 20th, 2019 at the Roy H. Park Auditorium at Ithaca College!  What a fun night — the culmination of much hard work and creativity from high school students from all over the region. Fifteen short, black & white silent films were submitted! Thank you to everyone who participated!
Special thanks to the fest’s Presenting Sponsor, the Roy H. Park School of Communications at Ithaca College, which graciously hosted us. And thank you, too, to our terrific Jury, a panel of six filmmakers, film profs, a festival director, and other industry professionals, who carefully deliberated and selected our winners:
1st Prize Tuesday’s Affordance by Izbelle Grimm, Jaden Demarest, and Roman Predmore/TST BOCES
2nd Prize Hourglass by Vicky Ying-Qi Lu/Ithaca High School
3rd Prize Approach by Sam Sachs/Ithaca High School
Honorable Mentions went to Farm Sanctuary by Amelia Ponirakis/NYS Summer School of Media Arts;  The Chase by Shannon Bittner/Ithaca High School; and Farewell by Gage Robinson/Chenango Forks High School.
Thank you and congratulations to Fiona Okumu, Silents Roar! Film Festival’s Managing Director, for her amazing work to make the event happen. Okumu is a sophomore  studying film at the Park School, came up with the idea for the student film fest as a senior at Ithaca High School, and  co-produced the festival with WSM Executive Director Diana Riesman in 2017.  Thanks to WSM intern, IC senior Suzanne Tang for her work on the festival.  We wish her all the best moving forward!
See you next year for Silents Roar! 2020! 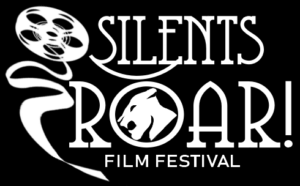