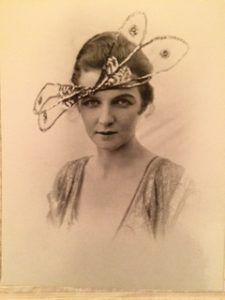 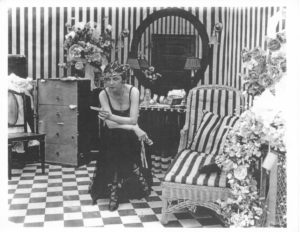 At the turn of the 20th century, the Gibson Girl was considered the archetypal woman: she was buxom and curvy with hair swept high atop her head like a small nest accenting a clean-scrubbed face. All bustled and buttoned, she was a man’s invention of what a woman should look like, demure, yet provocative.

Clearly, ballroom dancer Irene Castle would have none of that. Her flowing feminine gowns, many of her own design, were made of fabric that clung yet sashayed with every step and dip. She wore her hair in a Bob style, short and elegant, and coaxed the rise of the hemline. Irene and her husband, Vernon, danced snug to the jazzy ragtime music of the era, their lithe bodies in absolute alignment. Society dames didn’t know what to make of these bohemians but the masses did and the tango and fox trot became de rigueur in dance halls and nightclubs throughout America.

Castle made her film debut alongside matinee idol Milton Sills in Patria, a 15-part serial with an unprecedented budget of $85,000. Released in 1917, 10 of the episodes were directed by Ted and Leo Wharton and made in Ithaca. Funded by William Randolph Hearst, the seemingly patriotic film contained anti-Japanese propaganda. President Woodrow Wilson personally asked Hearst to pull and rework the film, which he did, barely masking his political bias. History doesn’t allude to why the Whartons didn’t direct the last five episodes but the rest of the serial was directed by Jacques Jaccard and shot in Los Angeles.

In 1919, a year after Vernon died, Irene married childhood chum, Ithacan Robert Treman. She was the It Girl and every move she made was chronicled in magazines and newspapers worldwide.

Irene Castle died on January 29, 1969 and is buried next to Vernon Castle in Woodlawn Cemetery, New York.