Finger Lakes Film Trail has officially launched — Rochester, Ithaca, and Auburn!
On Thursday, April 25th, WSM went on the road to the George Eastman Museum in Rochester to celebrate the Finger Lakes Film Trail, a new collaboration developed by Wharton Studio Museum, in partnership with Eastman Museum, and Case Research Laboratory & Cayuga Museum in Auburn.  This inter-county initiative highlights the historical importance of the Finger Lakes Region in the development of motion pictures.  WSM is thrilled to be part of this partnership.  The FLFT will offer annual programming at each of the three locations — Rochester, Ithaca, and Auburn — with three incredible stories!  FLFT’s inaugural event at Eastman Museum featured a screening of four episodes — recently restored by Eastman — from the Wharton Studio’s The Exploits of Elaine with live music by Philip Carli.
A trip on the Finger Lakes Film Trail, encompassing  Monroe, Tompkins and Cayuga Counties, will give visitors an engaging narrative of the region’s role in early American filmmaking: George Eastman developed a flexible film that was a critical contribution to the launch of the motion picture industry; Theodore and Leopold Wharton, prolific writers, directors and producers of silent films and serials, created Wharton, Inc. Studios on the shores of Cayuga Lake;  and Theodore Case and his associates revolutionized the motion picture industry with the development from sound-on-film technology.
Visitors will receive a little “Passport” to guide them from one destination to the other.  Perhaps they’ll receive a little gift once they’ve visited all three locations! All to be determined! FLFT screenings, events and exhibits will happen at all three destinations on the Trail.
WSM warmly thanks Humanities New York for its support of this project. 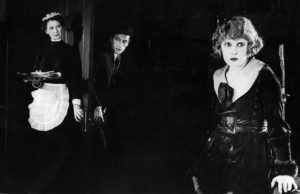 Your ticket for the: Finger Lakes Film Trail